skip to main | skip to sidebar

Have you ever met somebody that changed your life? That possessed all the qualities you wish you had? Maybe even made you a better person?
When you live in corporate , with the same daily routine at the office and no real perspective, you feel the need to find refuge in something… anything before you fall in depression or even go crazy. Some people start smoking, drinking, even drugs. Others opt for casual sex, start a hobby or become immersed in cyberspace.
Our protagonist chooses nothing else besides… support groups. Prostate cancer, AA, tuberculosis… anything where he can evade from his biggest problem: insomnia. But everything changes when he meets two people that would radically alter his lifestyle: Marla Singer and Tyler Durden.
Marla drives him insane. She took up the same “hobby” by visiting the same support groups, not having any one of the problems in discussion… just like our protagonist. changes his life. All it took was a meeting in an airplane, where cuts off his small-talk by opening his eyes to reality.
I think I’ll leave the message written at the beginning of the DVD of Fight Club to describe this movie. Pay attention and take action. You will never regret seeing this movie for a single second.

WARNING
If you are reading this then this warning is for you. Every word you
read of this useless fine print is another second off your life. Don't
you have other things to do? Is your life so empty that you honestly
can't think of a better way to spend these moments? Or are you so
impressed with authority that you give respect and credence to all who
claim it? Do you read everything you're supposed to read? Do you think
everything you're supposed to think? Buy what you're told you should
want? Get out of your apartment. Meet a member of the opposite sex.
Stop the excessive shopping and masturbation. Quit your job. Start a
fight. Prove you're alive. If you don't claim your humanity you will
become a statistic. You have been warned…

is one of the few action motion pictures that I can appreciate as a complete piece of art. I can honestly say that the filming concept was a work of genius and Frank Miller deserves every ounce of success that the movie received. With an amazing cast (starring Mickey Rourke, Bruce Willis, Clive Owen and Jessica Alba) Sin City brings to life the dark secrets that Basin City kept hidden in Mike Mignola’s comic book series. Unfortunately, I haven’t got around to reading the stories, but it’s definitely on my to-do list (and should be on yours, also).
What I found brilliant was the filming technique. Even though I’m not an expert in the domain, I fully appreciated the black-and-white setting with the occasional spots of symbolism decorated in color. The red dress, Becky’s blue eyes and lots and lots of blood made Sin City a completely unique movie from an artistic point of view. With an obsessive care for dark and painful details, it brings out the best in the noir genre so avoided and shunned upon by most.
Watching the movie, you feel as if you’re being sucked back into another era… with the 50s-like slang, the romantic lingo and threats that you would find in Casablanca, Sin City presents dialogue perfect for nostalgics that long for the old-fashion style that no longer has worldwide appreciation. Damsels in distress and knights in shining automobiles wander galore as you sit on the edge of your seat waiting to see who dies, if he saves the girl in time and if he can succeed in killing the villain.
A magnificent movie in which you get the best of everything: romance, violence, action, gore and passion are hiding in every dark alley in , waiting to be discovered by the eager but hesitant movie-goer that dares to reveal its secrets.
﻿ 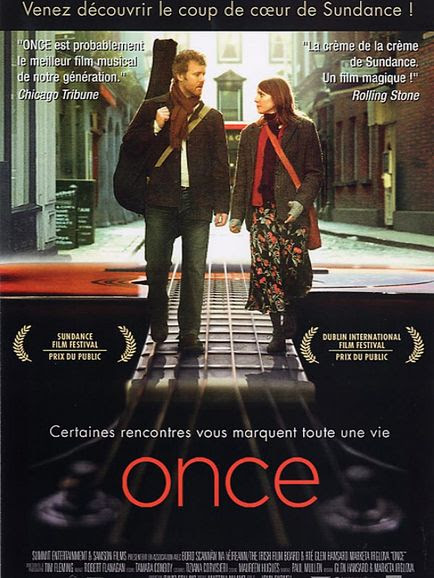 Budget? 180,000 €. Director? Never heard of him. Actors? Not even. Country? . Now why the hell would I waste my time watching this movie?
You can’t imagine how glad I am that I did.
How often do you find the right person? Once. The tagline for this independent European production beautifully describes its essence. Some would say it’s a modern-day musical owing to the Oscar-winning soundtrack filled with memorable, heart-warming melodies. If we judge Once from this point of view, it would be the most unconventional musical I have ever seen.
A love story? Some would say it is. The affection and strong sense of care are so deeply imbedded and so sincerely acted out that you sometimes believe it’s an actual story playing out before your eyes on the streets of Dublin. Sometimes you even feel as if you were spying on the intimate conversation and furtive glances dashing between Guy and Girl. That’s right; the protagonists in our story are unnamed. They could be anyone. Maybe even you. Or maybe even me.
Once isn’t your typical romance, where luxury and cheesy pick-up lines are omnipresent. No, Once presents difficult aspects of life such as poverty, the struggle to make a living and the even greater struggle of trying to make your dreams come true.
Sincerity, music and love are spectacularly intertwined in what I consider to be the most touching. independent production of the decade.

To my utter shame, I had never heard of The Shawshank Redemption until 16 years after it came out. Upon a good friend’s recommendation, I did a bit of research before viewing it. I was quite surprised when I found that it was classified as none less than number 1 in IMDb’s Top 250 list. Not until I watched it did I understand its wide appreciation accumulated in over a decade. I can honestly say it’s one of the greatest movies I have ever seen.
Rarely can you find all the elements for success in a single motion picture. Everything from the acting, the themes, perspective and concepts received a clean A+ on my behalf. Sci-Fi lovers might be a bit disappointed in its lack of special effects and use of ultimate generation technology, but those are nothing, nothing compared to the beautiful lesson you learn from it. Now why would you bother watching an “outdated” movie when you’re surrounded by the glory of Avatars and 2012s? The answer is simple: They just don’t make movies like The Shawshank Redemption anymore.
Do you want to hear about the plot? How about the action-level? Who dies? Who cheats on who? What makes this movie so damn great?
Hope. Freedom. Friendship. Challenge. Ambition. Love. Life.
The ingredients for a masterpiece.